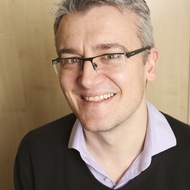 Chez Hall completed his in 2002 in the field of jet engine operation in wind. After his he worked with Rolls-Royce plc in the Fan Aerodynamics group where he was responsible for developing advanced computational methods to assess engine fan stability and performance. In 2004 he started work as a Research Associate on the Silent Aircraft Initiative for the Cambridge-MIT Institute. Here he led the research effort into novel future concepts for low-noise propulsion systems. In 2005 he was appointed as a lecturer in Turbomachinery. He has since been developing research into the areas of aero-engine design for reduced emissions, engine-installation and low-noise turbomachinery.

New propulsion system configurations have the potential to deliver significant reductions in aircraft emissions and fuel consumption. However, there are numerous technical challenges to their development. My research is aimed at overcoming the challenges that involve turbomachinery aerodynamics.

The open rotor is a configuration of engine in which a gas turbine core drives a pair of counter-rotating propellers. A key issue is their noise generation. Recent research has developed new methods and improved our understanding of the aerodynamic features that influence open rotor performance and noise. Current studies include open rotor design and operation, and engine-airframe installation effects.

Boundary Layer Ingestion (BLI) involves taking the low momentum viscous flow adjacent to the surface of an aircraft and it within the engine. This leads to more efficient propulsion. The difficulty is designing a propulsion system that can ingest highly non-uniform flow without suffering large losses in performance. Research using a fan rig has identified the details of how boundary layer ingestion impacts fan efficiency. The effects on fan operability and aeromechanical forcing are also being studied.

More conventional turbofan engines are moving to higher and higher bypass ratios. This means that the engine fans are larger and potentially more susceptible to particular operational problems. Research is underway the design and performance of these fan systems.