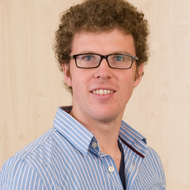 Sam is the Mitsubishi Heavy Industries Senior Research Fellow in Turbomachinery. His research at the Whittle Laboratory helps to develop new technologies for the energy and aerospace sectors.

Sam obtained his PhD from the Whittle Laboratory in 2013 for his work on axial compressor bleed and since then has continued to work with Mitsubishi Heavy Industries (MHI) on off-design compressor aerodynamics which aims to improve the efficiency and handling characteristics of industrial gas turbine compressors. He is part of the team which developed the successful proposal for the New Whittle Laboratory and is now working to help deliver the project’s revolutionary new test facilities.

As well as working with MHI, Sam has set up the Whittle Lab’s collaboration with Reaction Engines. This has resulted in Masters student research projects investigating counter rotating turbines, super-aggressive compressor S-ducts and Helium turbine design, all with the aim of improving efficiency and reducing the weight of Reaction Engines’ SABRE engine.

Sam is involved in the Whittle Laboratory’s research into the emerging field of electric aircraft design and is running two student projects which are investigating the performance of ducted fan propulsors. These projects combine computational simulations, a static test rig and a flying quadcopter and aim to improve the performance of propulsion for e-VTOL (electric vertical take-off and landing) aircraft.

Underpinning much of his research, Sam is experienced in both time-averaged and unsteady measurement techniques and has recently developed a novel method to improve the accuracy of pneumatic probe measurements in non-uniform flow fields. He is currently working on high-fidelity unsteady measurements of stall inception in axial compressors.

Sam’s teaching responsibilities include Part I maths and Part II compressible flow supervisions for Girton College as well as supervising 4th Year Masters students. He leads the Whittle Laboratory project for the Clifton Scientific Trust which provides 12 English and Japanese school children with the opportunity to experience a week-long research project in a university laboratory setting.

Away from work Sam enjoys playing hockey and is involved in coaching and administration for both Cambridge University and Cambridge City Hockey Clubs. Sam’s love of sport, and cricket in particular, has spilled over into his research as he is currently supervising a PhD project investigating the aerodynamics of cricket ball swing.